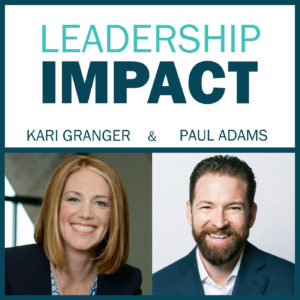 This season flipped the script on traditional thinking, causing a fundamental shift in the way we relate to accountability.

In the old paradigm, accountability was about explaining what went wrong; it was something to avoid; something that took up time at work; it was either the thing that missing or the thing we were subjected to; and it caused lots of suffering in organizations.

Out of listening to this season’s episodes, a new orientation accountability has emerged that is empowering; one that’s about creating the future; one about partnership; in fact, it opens a whole new paradigm of how we can interact with others.

Join Kari Granger and Paul Adams as they share highlights, provide recommendations, and reflect on Season Two. With an eye towards the future, Kari and Paul invite the audience to provide feedback on the podcast and suggest topics they would like to see covered in Season Three of Leadership Impact.

02:13 – Kari provides her number one highlight from Season Two

03:34 – Paul speaks to the unique nature of podcasts

04:29 – Paul recalls his number one highlight from Season Two

05:00 – How Kari’s work with the military shed light on the difference between enforcement and inspiration

07:06 – Flipping the script on what accountability means

08:36 – Practices Paul has implemented from this season on accountability

11:09 – The importance of partnership as it pertains to accountability

14:18 – Kari reminds the audience of her online Accountability Course

18:40 – Kari invites the audience to engage with the podcast by writing a review, leaving an honest rating, and connecting directly.

[Counter-intuitive, deeper dive into topics that are critical to creating a leadership impact]

“I think what’s happened in this season is a shift to new, empowering orientation. It’s about creating the future. It’s about partnership. It’s not just accountability.” – Kari Granger

“One thing that’s unique about podcasts is it’s an intimate conversation that you’re getting a chance to participate in, and that is especially useful with a topic like accountability, since it can be a confronting conversation for people.” – Paul Adams

“I love the episode we did about how to mess up, fess up, and level up, because it gave us that ability of like ‘everybody makes mistakes, not everyone can get everything done perfectly all the time.’ And that it’s actually an opportunity to further a relationship.” – Paul Adams

“An orientation of partnership is so critical to having all the component pieces of this season be effectively implemented.” – Kari Granger

“Maybe our next season – Season Three – ought to be a deep dive into trust as a critical component of hard performance metrics as well as the qualitative aspects of culture and experience and fulfillment at work. Let us know what topics, questions, and challenges around trust you’d like us to cover.” – Kari Granger

“We like to take a counterintuitive deeper dive into different areas that are critical to our leadership impact. What would you like to hear us cover in season three?” – Kari Granger

Paul’s Other Podcast: Your Business Your Wealth

Acknowledgements:
Our work is mosaic art. We read, study, and practice many philosophies, methodologies, and modalities of human performance, to ensure that our approach best serves our clients. We would like to acknowledge all of the thought leaders and organizations, whose ground-breaking work has influenced the Granger Network approach – especially Fernando Flores, Jim Selman, Michael C. Jensen, Julio Olalla, Pluralistic Networks, The Newfield Network, and the Strozzi Institute.