“Think about performance reviews as an opportunity to have a strategic conversation, to align a colleague’s performance with the ultimate contribution that they’re hired to make in the organization.” – Kari Granger 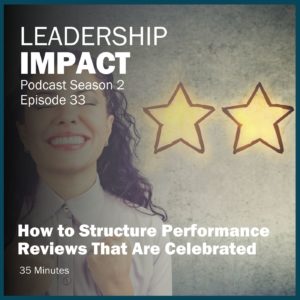 For many, performance reviews are nothing more than an end of year obligation that devolves into uncomfortable conversations about performance gaps and compensation. However, if we structure them to take us step-by-step into aligning with one another in four key areas, performance reviews become a treasured opportunity for both colleagues and a huge opportunity to leverage performance toward a shared vision. Join Kari Granger and Paul Adams as they dissect how organizations can utilize performance reviews as a tool to acknowledge contribution, identify the relevant domains of evaluation, assess performance impact, and partner for future development.

00:54 – Introducing today’s topic: How to Structure Performance Reviews That Are Celebrated

01:26 – Paul speaks to the nature of performance reviews

07:39 – The way in which we think about performance reviews

12:06 – Why collaboration is key to improving performance

14:17 – The importance of aligning on the areas of performance evaluation

22:14 – The final stage of performance reviews: looking towards the future

23:00 – The “conversion” that happens in a true conversation

25:57 – Paul calls-out that Kari is using “what questions” in her example, which reflects the distinctions covered in Episode 33: Get to the Heart of the Issue with These Questions

26:01 – Paul provides a powerful insight on how people relate to their performance reviews

26:43 – Practical actions we can take coming out of this episode

27:39 – The importance of treating performance reviews as a mutual partnership aimed at achieving the same goals

33:54 – Kari leaves the audience with a final piece of advice

“Performance reviews, if not well crafted, can feel like I’m coming in to hear the ultimate judgement of whether or not I’m a good or bad person.” – Kari Granger

“Performance reviews are an awesome opportunity to see the contribution that you’re making in service of the greater goal or the greater outcome, or the greater vision. That, in and of itself, can be really fulfilling to people.” – Kari Granger

“Look together. In a true conversation, we should expect a ‘conversion.’ Do not expect to leave thinking in the same way that you did going into the conversation.” – Kari Granger

“People are relating to their performance reviews as a dictation of past transgressions, if you will, instead of a conversation about future performance.” – Paul Adams

Paul’s Other Podcast: Your Business Your Wealth

Acknowledgements:
Our work is mosaic art. We read, study, and practice many philosophies, methodologies, and modalities of human performance, to ensure that our approach best serves our clients. We would like to acknowledge all of the thought leaders and organizations, whose ground-breaking work has influenced the Granger Network approach – especially Fernando Flores, Jim Selman, Michael C. Jensen, Julio Olalla, Pluralistic Networks, The Newfield Network, and the Strozzi Institute.