A study by researchers at Stanford University found that people who frequently switch between several streams of media (e.g. email, internet, text messaging, instant messenger, social networking, etc.) do not perform as well as those who prefer to complete one task at a time.

The researchers kept looking for the benefit in multitasking and couldn’t find it.  They found that 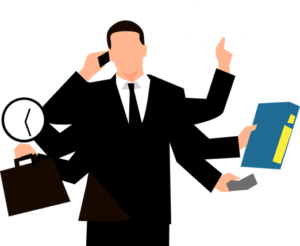 Why did that quite strike me? Because I could see myself in it!

The number of different media vying for our attention keeps increasing. If you’re anything like me, you likely receive at least one invitation a month to some social networking site you don’t use and aren’t planning on using.

So, what are we to do in the face of this onslaught? There are three aspects I have found useful: awareness, choice and infrastructure.

First is to elevate our awareness of the habits we have that reduce our effectiveness. When I read the news item about the study and a transcript of an interview with Dr. Nass, I began to notice much more clearly when I would be talking on the phone at the same time as looking at my inbox, or writing a proposal, doing an unrelated internet search, and answering instant messenger, all at the same time. In other words, I became much more aware of some of the counterproductive habits that had crept into how I operate.

Once we are aware, the second aspect is to choose to do those things that will most support us in fulfilling those areas of fundamental interest or importance to our organizations and ourselves. This choice is often the hard part. We have to give up whatever pull there is to do that internet search, or send that IM, or see what people are doing on Facebook.

What I have found is that my Capture Tool* becomes more important and more useful. Rather than go down the path of finding out something irrelevant (for example, is calamari considered a shellfish), I make a note in my capture tool and get back to what I was previously doing.

The third aspect is our infrastructure, particularly our electronic infrastructure. There may be some elements of infrastructure which will be permanent changes to settings.  As an example, turning off all email alerts (noises, pop-ups, etc.). There are other elements of the infrastructure that we may change for only a short period of time.  For example, I have begun shutting down my email and instant messaging programs for a couple hours while I am working on a document. When I am done with the document, I then turn everything back on.

I invite you to observe yourself and catch yourself multitasking. See what it takes to make a choice to do what most supports you in fulfilling your concerns. Play with your infrastructure and see what assists you in focusing on one thing at a time. We look forward to hearing what happens for you!

By the way, calamari, or squid, is a mollusk, which does place it in the same biological family as shellfish. And, I looked that up only after I completed writing the above!

* Capture Tool: the notebook or device in which one captures the things there are to do or handle and relevant information. This is one part of the Accomplishment & Productivity Workshop.