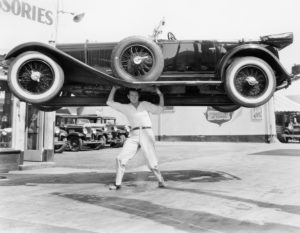 Have you ever heard those stories of normal people singlehandedly lifting cars to save someone pinned underneath?

It’s a thing, and it has a name: hysterical strength. Hysterical strength is “a display of extreme strength by humans, beyond what is believed to be normal, usually occurring when people are in life-and-death situations.” The exact scientific explanation of this phenomenon is inconclusive, but there are more than a few documented cases of it happening. Just last year, for instance, an Ohio high-schooler lifted a 3,000 pound truck to save his neighbor.

Crazy, right? On the surface, absolutely nothing changes. The teenager undergoes no spontaneous, super-charged weight training. He’s the same person he was just a moment before. But in an instant, a simple and sudden change of context (“this person is under the car”) and an accompanying thought (“I must save this person’s life”) has this regular human demonstrate capacity beyond what should be possible.

Hopefully none of us ever find ourselves in the position of needing to tap into hysterical strength in this way. But this phenomenon has a lot to teach us about the power of context in yielding such extraordinary results. Though I’ve never seen someone lift a truck in person, I have seen a shift in context make the impossible suddenly possible. What causes this shift? How does someone go from “no way” to “it will be done?” How do we move from resignation to responsibility?

I heard a story about a mother who one day noticed a rash on the side of her daughter’s neck that looked like prickly heat of some sort. She consulted the girl’s doctor, who thought it was nothing to worry about, but the mother wasn’t convinced. Without a referral, she took her daughter to a dermatologist.

The dermatologist took one look at the bumps and informed the woman that this was not, in fact, a simple rash. It was pseudoxanthoma elasticum, or PXE, a rare genetic disease. He informed her that her daughter would age prematurely, go blind, and potentially die in her 30s. And he took a look at her other child, her son, and informed the mother that he had it too.

“Okay,” she asked, obviously in shock. “What’s the course of action? What are the pills? The procedures? What do we do?”

“There’s no course of action,” he told her, glumly. “There is no cure.”

It was at that critical moment that this woman and her husband looked around and said: “Well…I guess we’re it.” Never mind that neither she nor her husband had any sort of medical background whatsoever. He managed a construction company. She was a stay-at-home mom with a degree in theology.

But for her and her husband, impossible was not an option. This doctor was talking about their children. Their own flesh and blood. This was life and death. They had no choice but to do every possible thing for their kids’ survival.

As luck would have it, they lived in Boston and had access to medical libraries. So, they jumped in. They began devouring thick, dense medical volumes. They might as well have been written in another language. At first, they could barely put two words together. But they pressed forward. This wasn’t a task to be crossed off a to-do list: “Read medical research on this rare genetic disease.” This was an outcome that they had become totally, utterly at one with. They eventually borrowed bench space at a lab at Harvard. From 8:00 PM until 2:00 AM each evening they extracted DNA and searched for a gene.

Within a few years, they identified the PXE gene, created a diagnostic test, and put together a PXE research consortium. They currently have several treatments for PXE in clinical trials.

If their context had been simply about being good people finding a cure for a random genetic disease to do good in the word, a million excuses would have had them throw in the towel. “We don’t have the right education, the right connections, the right position or authority to do anything about this…we are powerless.” But the moment they looked at their children and realized “we’re it,” they claimed their power.

These are dramatic, perhaps even traumatic examples. But this is a lesson that we can bring down to earth and apply to our day-to-day lives and leadership. For the stuff in life that really matters, we’ve got to find a way to turn it from a task on our list to an outcome that lives in our very bones. Tasks leave room for choice. Non-negotiable outcomes aren’t about “if”—they’re about “how.” When we’re oriented to the challenge in that way, we find new pathways that we simply wouldn’t have seen otherwise.

Think to what matters most in your own life: Where are you standing on the periphery of responsibility? Where have you gotten into the habit of ticking off relatively meaningless tasks, without moving the needle towards your ultimate goal? And how might you shift your mindset, your context, by reconnecting to the ultimate outcomes this opportunity presents? By imagining your back against the proverbial wall? Can you express what must be done not as a task to be handled but as a non-negotiable outcome that simply must come about? This might be the very thing that gives you access to creativity and determination you never knew you had.